Positive and Negative Effects of Globalization

Globalization is a process through which there is interaction and integration of people, companies and governments from different nations through international trade and investments. This has reduced the enormous world into what would seem like a global village. 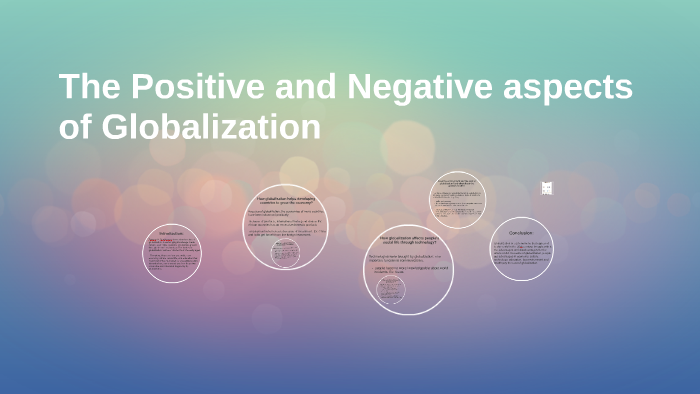 As most young people continue to acquire education, the number of low income casual workers continues to decrease as most industries employ skilled workers only due to complexity of system operations. Globalization enables them to gain employment in other states and consequently enables them to earn a livelihood, reducing the difference between the rich and the poor.

Globalization has enabled companies to access a bigger consumer base as they expand to other regions outside of their own country, boosting sales and making more money.

Globalization has created need for better and improved means of communication and advertisement of products to the consumers. This has led to innovation of more advanced communication techniques such as improved internet speeds which make communication faster and more efficient. Many advanced advertising websites and applications have also been created to facilitate online trading.

Globalization has enabled companies to expand to areas where the cost of production is reduced .This in turn make goods produced to be cheaper as it is no longer expensive to produce the goods they sell.

Globalization has led to many countries heading to other nations to tap the consumer base, creating more jobs in the countries they head to. This creates better wages for the people in these countries improving their living standards.

Globalization has brought governments together to tackle common goals, for instance it has brought leaders together to look into the impact of pollution and hence have resolved to fight climate change together. It is also highly unlikely for countries to go to war if they trade together.

Globalization has enabled more investors to open companies in their countries as well as other states. This has increased competition among different countries both local and international for market hence compelling them to improve the quality of goods and services offered to the consumers.

Due to the need of movement of goods and services to and from one country to another, globalization has brought about the need of governments to help each other in building of efficient infrastructure such as roads which enables the positive growth of a country’s economy.

Availability of advanced schools in developed countries causes students from developing countries to go abroad to obtain skills to use in their future careers. They eventually use the skills acquired when they get back to their countries of origin to improve their living standards.

Globalization has led to increased number of businesses which consequently causes extensive use of natural resources at a faster rate than they can be regenerated ,impacting a negative effect to the environment.

Also since the laws on environmental protection in developing countries are not as strictly adhered to as those in the developed countries, some investors leave their countries to take advantage of that opportunity to manufacture harmful products, causing hazard to the environment.

Due to the high competition caused by globalization, only the companies with best prices for similarly produced commodities win .This causes major fluctuations in prices of products to ensure that each company producing similar products remain in market.

Globalization has also led to increased global need for skilled professionals who are the minority people in most developing countries. Despite the fact that available jobs are poorly paying due to high demands, most people are still left unemployed hence are unable to meet their basic needs which results in increased crime rates.

People move a lot from one country to another for the purpose of studies, businesses, work and access to hospital services. Terrorists also go to foreign countries in false pretense to perform a terror attack, causing fear to the citizens of the country.

Imbalanced economy and abnormal prices of goods and services results in fluctuation of the dollar price in developing countries.

Increased consumption of processed foods as well as planting crops using chemicals to reduce time they take to grow has led to increase in people suffering from chronic diseases. This increases mortality rate, hence reducing lifespan of people in developing countries.

Globalization has led to mixing of different cultures causing people to consider their customs as primitive. This has caused people from developing cultures to adopt the western culture and abandon their own. Since the cultures they adopt are strange to them, people conduct themselves regardless of laws abiding them leading to increased crime rates.

Employment opportunities created as an impact of globalization have led to movement of some people from their respective homes to go abroad for many years for work purposes. In so doing

Children are left stranded at the mercy of volunteers and shelters. Also, the money earned from the jobs obtained is at times not enough, hence cannot be used to support seniors left behind to care for themselves hence they are left neglected and die due to sickness.